Female Coaches in Male Professional Sports (or the Lack Thereof)

We are living in a time where women are breaking barriers every day and achieving great things that no one would have expected a few decades ago. More women are becoming CEOs of companies and dominating men in some industries but there is still one industry where women seem to be alienated. That is coaching in men’s sports. Women are overlooked for almost every coaching job available in male professional sports, but why? Is it because they lack the sports IQ? In my mind, women are able to learn and excel in sports just as well as men do but it is up to the big decision makers of professional men’s sports teams such as general managers to break the barrier and allow women to share their expertise with professional teams.

Some teams say that they are open to having women coach their team and most athletes would agree with that, but then why hasn’t it happened? It doesn’t matter if they think that they would allow it to happen, their actions prove that it is not happening and that speaks louder than their words.

Currently, in the four major sports in North America, consisting of basketball, football, baseball and hockey, there are 122 teams, approximately 1,000 coaching jobs and only one female coach. The American population is made up of 50.8% females and only one of those females can say they are a coach in one of the four big sports in America. That woman is Becky Hammon. 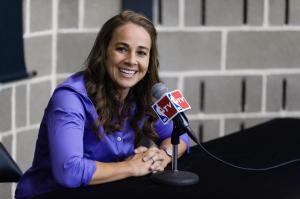 Becky Hammon speaks with the press.

Becky Hammon was hired in the offseason in 2014 by the San Antonio Spurs, just after they won the NBA championship. Hammon and the San Antonio Spurs broke the barrier of female coaches in male professional sports and she is now coaching alongside one of the most well respected coaches in the NBA, Gregg Popovich. It was Popovich’s decision to hire the 16-year WNBA veteran to his coaching staff after he found himself very impressed by her outstanding basketball smarts and work ethic when she worked with him the previous season. The five time NBA championship winner Popovich once told, now assistant coach of the San Antonio Spurs, Becky Hammon, that “I’m hiring you because you’re a good fit here and you just happen to be a woman”. Professional sports teams all pride themselves on outstanding performance, so it is essential that any coaching decision be made with great seriousness so that they will hire the person with the best qualifications in the field, no matter what gender they are.

That being said, why is there still only one female coach out of the 122 teams and approximately 1000 positions? There are head coaches, assistant coaches, strength coaches, player development coaches, conditioning coaches, mind coaches and many others and the vast majority of them have one thing in common, they are men.

Now this is considering all possible positions in male professional sports, but what if we only looked at the job of head coach? Zero percent of head coaches are women and with coaching jobs popping up every year, women are rarely considered. Why can’t women be thought of when they have the knowledge to lead a team? But it is not only male professional sports that are a problem. In the WNBA, women only made up 50% of head coaching positions in the WNBA as of last season. Now you can’t even bring up the argument that women are unfamiliar with the male game because supposedly they are not familiar enough with the women’s game to make up the majority of their head coaches.

There’s an argument that women cannot coach men at a high level because they have never competed at that level in a man’s sport. Although this argument might influence you to view women as ineligible to coach at a high level, you might reconsider since there are male coaches who have never played to the level that they are coaching. For example, Ken Hitchcock coached his team to a Stanley Cup win in the late ‘90s, yet he never played hockey at a high level. If men are accepted even though they haven’t played a high level, why can’t women also be accepted? Here’s an even more extreme example, Doug Belvins, kicking coach of the Miami Dolphins, was diagnosed with cerebral palsy at a young age and lost his ability to walk, and guess what, he never kicked a football, yet ex-New England patriots kicker Adam Vinatieri praises his coaching methods. Furthermore, there is proof that even the best athletes in the sport do not always have coaching success when they take on the job. Look at Wayne Gretzky for example. Known as the “Great One”, he scored more points than any NHL player in the history of the game, yet his tenure as coach for the then Phoenix Coyotes didn’t exactly last too long. He was released after failing to make the playoffs four years in a row.

Like men, women have the ability to have a high sport IQ, a good work ethic and great interpersonal skills to get along with players and staff and this should mean that they are qualified to coach for a male professional team. In the end, if a woman or man knows the game, they are an asset to the team. Women are no different than men, they bring the same passion for the game to their coaching ability as men do. They push themselves, just like men to higher levels in order to achieve their goals. It isn’t easy for anyone to get to the level at which they feel that they’ve fulfilled their dreams, it’s an uphill climb for both women and men, but they do it because they know they can make a contribution to the sport.

We claim that sexism is non-existent, but in reality, it is alive and well. The fact that women are not accepted in coaching jobs in men’s sports is not based on ability, it is because we believe for some inexplicable reason that they are unable to coach the opposite gender.

A Coach Who Happens to be a Woman